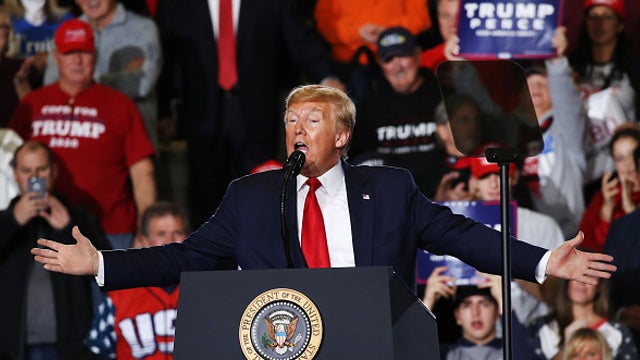 Zero witnesses in Schiff's underground SCIF where he was conducting these depositions and interviews and orchestrating public testimony based on what these people said during their depositions. Not one Republican witness was called. So Schiff presents his case all the way since October, and now the Senate says, "Well, we just saw a summation here bereft of evidence. We have nothing fact based in this presentation. We need witnesses!"

Well, Schiff had all the witnesses, and they don't have any facts. It's been going on since October. "In an ABC News/Washington Post poll, Trump has surged by double digits in head-to-head matchups against his competitors. Against the four most likely winners of the 2020 Democratic presidential primary, in October Trump was down 56 to 39 against . As of now, the gap has closed 13 points. Trump is down four points to , 50 to 46." That's within the margin of error in this poll.

Against Crazy Bernie, "Trump was down 14 points in October. That gap has closed by 12 to just a two-point lead" for Crazy Bernie. The point is... You might say, "But, Rush, these guys are still beating him." Yeah, but that doesn't matter, folks, because who's...? Like I said to a caller yesterday: You can't remember the polling data on this very day, January 29, 2016. You can't tell me what it was. It doesn't matter what it was then.

What matters here is in the midst of impeachment, since October -- in polling data conducted by the Drive-By Media -- Trump is wiping out the leads that these four Democrat potential nominees had over him. He is gaining ground during the impeachment, not losing ground. It is backfiring on them. It will continue to. Elizabeth Warren was ahead of Trump by 15 points; since impeachment began, she has lost every bit of that lead. Trump has wiped out her 15-point margin over him; they're now tied at 48.

Even Mayor Pete, Pete Buttigieg. Back in October, Mayor Pete led Trump by 11, 52 to 41. As of now, Buttigieg has not only lost all of that lead; Trump now leads him by three. So there's been a 14-point swing against Mayor Pete. So Trump is storming back. The support for the president in these Drive-By polls is just screeching. I mean, it is ramping up fast while this impeachment is taking place.