RUSH: Yeah, Mr. Snerdley reminds me that there was a media meltdown when I canceled the Twitter account. It was first reported that Twitter suspended me. I had all kinds of people sending me emails, "Did Twitter suspend you?" And I didn't answer any of these things. Just let it sort itself out, which it eventually did.

RUSH: So it was last Saturday and last Sunday and even into this morning, I saw that Twitter banned Trump. They suspended his account.

They canceled him! They wiped him out. They erased him. They said he's sayonara. So I called Kathryn. I said, "We gotta get outta Twitter. This is unacceptable. We need to do cancel the account. We need to do whatever we have to do to get out of it. Just go in there and shut it down." She said, "It's a great idea." So we did, and then the next thing I know, it's being reported that Twitter canceled me. 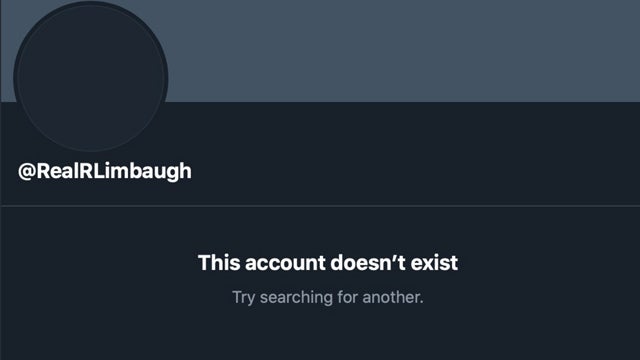 So I just let it go, and then eventually one of these bright-eyed, bushy-tailed media people got the wise idea to call Twitter and ask them, and the Twitter spokesman said, "No, the user canceled the account. We didn't cancel it." So then there was great relief. There was great relief among the Drive-By Media. Twitter did not cancel me. I suspended my own account.

That then created a joyous media reaction, and we have a montage to illustrate how. You know, increasingly, folks, I don't like taking up broadcast time with media comments about me because they happen every day, and it's... You know, when the program was new and the media was talking about it, that was a big deal. That helped promote the program.

This program can't get much bigger than it is, and so we don't need to do this to promote the program. It's gotta have some kind of news value or otherwise entertainment value. We don't just do it for the heck of it. That's why I saved it here 'til the last hour. But this is the montage from Saturday, Sunday, and even this morning.

MEGHAN PACKER: Take a look at Rush Limbaugh's Twitter page. It has been deactivated, but not by Twitter, but by Limbaugh himself.

MARK MEREDITH: Conservatives are deactivating their accounts in solidarity, including Rush Limbaugh who had millions of followers of his own.

AINSLEY EARHARDT: Rush Limbaugh took his down. He deactivated it.

RUSH: Yeah, we were up for about three months there on Twitter. Let's see. October, November... Yeah, 3-1/2 months, and I know a lot of you were very, very upset with me when we went on Twitter officially. We had a couple of Twitter accounts out there. We didn't use 'em much. But it was all part of revving and up gearing up for a big push.